Aboriginal people have occupied this region for several thousand years that we know of, from c7000 years ago. Prior to that knowledge is scant. There had been major climatic upheavals; the ice age and its ending c10,000 years ago. At that time an alluvial plain separated what we now know of as the Yorke and Fleurieu Peninsulas. As the ice melted this plain was flooded to form Gulf St Vincent, or Wonggayerlo in the Kaurna language. The sea levels stabilised c7,000 years ago and the contemporary coastal landforms then evolved through cliff erosion, dunal formation on so on. 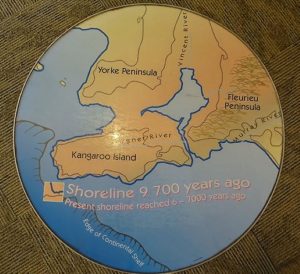 The lower reaches and mouth of the Anacotilla River were prime habitation areas with meeting/camping grounds and fish traps known of. In the 1930s a significant burial site was located in a coastal cave to the north of the river mouth. The creation ancestor Tjirbruki travelled along the coast on his final journey to inter his deceased nephew’s smoked dried body in a cave further south.

The Anacotilla River, like many other rivers, was likely a travelling corridor from the coast to the hinterland but at this stage we have found no archaeological or historical evidence of more permanent utilisation.

This region had been understood to be Kaurna Yerta Kaurna Country but in a puzzling Native Title decision in March 2018, and without explanation by the Court, the region south from Myponga Beach to Cape Jervis was excluded from the determination. There are however many Kaurna language place names in the region.

The use of the name Kaurna to describe the Aboriginal occupants of this region only evolved in the 20th Century. In the colonial era, and particularly at settlement, Aboriginal groups were more so known by a geographic identity; the Rapid Bay tribe, the Encounter Bay tribe and so forth. There was movement between geographic regions and inter-marriage as well. It is likely the Aboriginal people of the region were bi-lingual speaking both the Kaurna and Ramindjeri languages (Encounter Bay).

The name Anacotilla is more likely to be of  Kaurna origin but the meaning is not known. The name is found on the first survey maps in 1839-40, along with Congeratinga, Yankalilla, Bungala, Parananacooka. This means that the names were obtained from Kaurna members of the survey team (apart from Yankalilla, which was already known from Colonel Light)

Linguistically Anacotilla is a puzzle (e.g. since it ends illa, it should probably have one less syllable), and it’s probably garbled in some way which can’t so far be deciphered. (Schultz, 2014, pers. comm.)

Kaurna place names researcher Chester Schultz is presently (2019) writing up extensive research on the Aboriginal peoples of the Fleurieu Peninsula in the early 19th century and his forth-coming book will provide a far more comprehensive historical understanding.

A senior Kaurna custodian has visited Anacotilla Springs on a couple of occasions as part of broader cultural activities and teaching in the region. We welcome these visits and whatever may evolve in the future in acknowledging Aboriginal custodianship of our land.