When we first bought the property the historic stone weir that damned the Anacotilla River not only supplied us with our water but intrigued us to its building.  Our interest in its history was sparked even more when we found an inscription on the stone weir, indicating that Garnet Kelly had built the weir in 1907. Who was this Garnet Kelly and how did he build such a stone structure in those times? 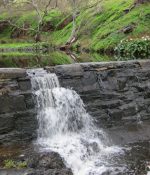 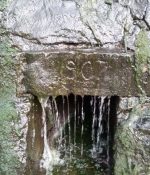 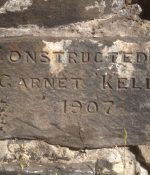 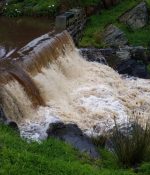 Fortunately an article was written in the Observer on 5 September 1908 on the building and use of the weir. The following extract provides an insight into the endeavours undertaken to construct the stonework by hand.

“Before a weir could be built the banks had to be bared to the solid rock and a stream of water conducted in pipes round the site into the creek below, and then the mason work began. Temporary derricks were erected, and massive stones of great weight were raised from the creek’s bed and swung into their places on beds of colonial cement. The whole became as solid as the rocks on either side. The weir is five and a half feet wide at the base, slants to 2ft at the top and is 6 ft high. A fortnight after completion storm waters of more than ordinary severity proved the solidity of the masonry. It dams back 120,000 gallons of water, which is conducted in 6 in. iron pipes for about a quarter of a mile to the irrigation plot.” 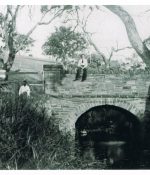 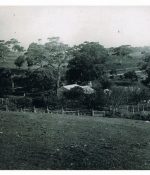 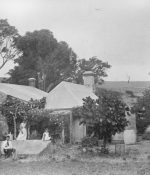 But for brief intervals, he spent the whole of his life at Anacotilla Station . He farmed Anacotilla Station, in partnership with his father, where he demonstrated a progressive and innovative outlook. He was one of the first in the district to use wire-netting for the control of the serious problem of rabbits. In 1907 he built the large stone weir across the Anacotilla River providing for irrigation of lucerne and to drive a Pelton turbine water-wheel, which powered a chaff-cutter and grindstone. He planned an irrigation system for Crosers at Rapid Bay and was chosen by Walter Hume to assist in setting up a factory in Melbourne to manufacture pipes. 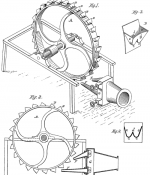 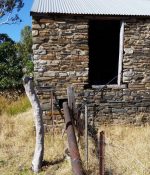 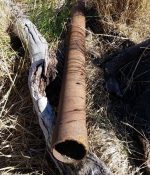 He was known locally as a remarkably fine young man and was esteemed for his qualities, which made him popular with all sections of the community. He took an active interest in church matters and filled various offices in connection with the Methodist Church. He was president of the Rapid Bay Literary Society, and secretary of the British and Foreign Bible Society Branch. At the time of enlisting in 1916 he was a Councillor in the Rapid Bay District Council.

Garnet enlisted in March 1916 at the age of 32 years. He trained at Seymour, Victoria before sailing to England on the HMAT Runic in June 1916, arriving at Plymouth in August 1916.
A Sapper in the 10th Field Company Engineers, he obtained the rank of Lance Corporal.
He departed for France from Southampton on 23 November 1916. He was killed in action on the morning of 8 January 1917 at Armentières, France and is buried at Cité Bonjean Military Cemetery, Armentières. 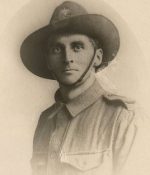 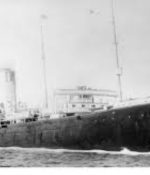 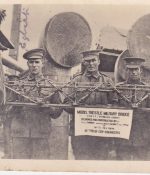 Garnet on far right with a model trestle military bridge 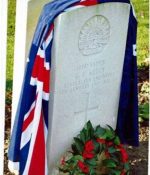 In 1983 a reserve just south of Normanville was dedicated to Garnet Kelly’s life and legacy to the region. In May 2018, as part of the Heritage Fleurieu Coast Festival, we helped organise and conduct the Garnet Kelly Reserve Rededication event which reaffirmed his significance as an early pioneer and innovator.