We bought our first herd of eight cattle in November 2012, and for the first six years hired a bull to service the cows. Our first calf, Misty, was born in December 2013. A total of 34 calves have been born at Anacotilla Springs to date, and nine heifers born at the property are now part of our breeding herd. We have had our own bull, Lindsay, since July 2018 and he has just completed his second successful year, siring nine calves in 2020 and eight in 2019. (Check out our Snippets page for ongoing updates.) 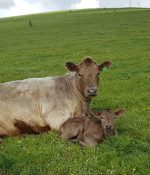 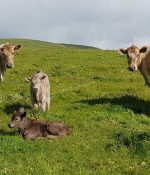 Ivory and Cam, Passionfruit and Lizard 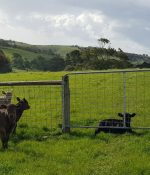 Some terms that as novices we had to learn, as most of us just referred to them as ‘a cow’. 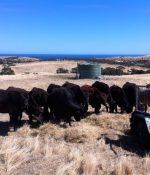 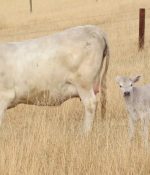 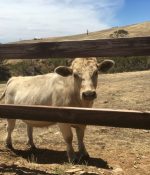 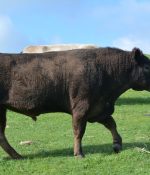 Livestock grazing is a recognised method of grass and weed management. Anacotilla Springs has a Dry Stock Equivalent (DSE) of 10, meaning that a ratio of one head of cattle per hectare is a good way to maintain healthy pastures and animals.

Over 30 ha (72 acres) of our 61ha we run a herd of Murray Grey beef cattle, usually between 20 to 30 cattle. It was a steep learning curve for us both having had little experience with farming cattle. However with a lot of reading, assisting friends who already have a farm, attending NRM courses and help of locals we became more confident in our animal husbandry.

We believe low stressed, healthy and content cattle is not only good for them but us! We practise low stress stock-handling techniques, which basically tries to reduce stress on the cattle (and thus yourself) during any animal management and husbandry.  Watching  Temple Grandin videos on her unique (being on the Autism spectrum) views on cattle handling which is now professionally accepted in many areas of the cattle industry, has also given us a lot of insight.

Whenever we need to move the cattle between paddocks or down to the yards, we don’t use dogs or bikes, just walk with them (on occasions run!). We use their natural flight zone, moving closer to encourage them to move in the direction we want them to go, and rewarding them by moving back slightly away. We try to maintain their natural wariness of humans but that they are comfortable with our presence. This can mean at times they can be annoyingly inquisitive! 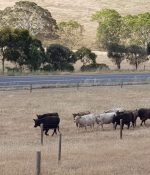 A friend moving the cattle 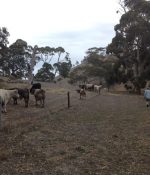 The picture, above left, illustrates the 3 different colours of the Murray Grey: Black, Silver (the very light colour) and Grey (light brown/grey colour). All the cattle have a dark skin under the coat. The breed is naturally Polled, which means they don’t have horns.

Another one of our early learnings is the very young calf is often hidden, blending in with their surrounds while the mother is off getting food and water. At times this can be quite some distance and the cow doesn’t seem to be paying any attention to the calf at all.  However, on one occasion the mother was paying more attention than we thought and when she saw how close we were to her calf she came racing toward us. It’s amazing how quietly and quickly a 500kg cow can run! Luckily the refuge of the car and trailer were close by.

Find the young calf in the pictures below! 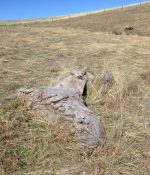 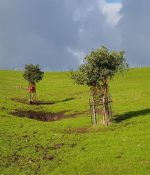 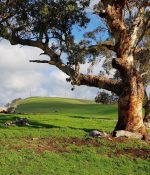