Our revegetation and environmental management techniques include fencing off water courses and riparian zones (riparian zone or riparian area is the interface between land and a river or stream), allowing natural rejuvenation of red gums, supported with extra plantings, weed management, the planting and protecting of individual paddock trees. The farming of a herd of Murray Grey cattle is used for pasture management.

Our first step was to remove livestock from the water courses including the Anacotilla River. This required extensive fencing and we were supported in this by the SA Government agency Natural Resources Management (Adelaide and Mount Lofty) (NRM), and with advice and assistance from local farmers / suppliers. With access to the water courses removed we had to provide water for the cattle through an infrastructure of tanks, pipes, troughs and pumps.

The NRM also assisted us in tackling some of the weeds that had become established in the river areas, particularly Briar Roses and Arum Lilies. We were fortunate to have joint work plans with them for our first six years which enabled us to progress the riparian area fencing and weed management strategies. Now that our work plan with the NRM is complete we are working on these problem weeds ourselves, and employing the same contractors to ensure the work on the Arum Lily already completed is not undone due to lack of persistence. Common weeds such as Apple of Sodom, Nightshade, Salvation Jane, Scotch Thistle and Soldier Thistle are also problematic and we are constantly working on eradicating them by grubbing out and occasional use of chemicals. 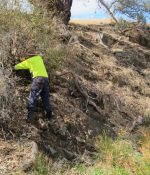 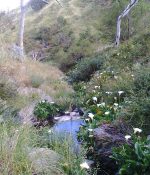 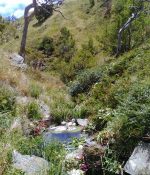 Our Revegetation program covers a number of different environments on the property,

Early advice from the NRM courses we attended was to watch the land and observe its own regenerative processes as they unfolded. Given the initial fencing we had already taken to give the riparians areas an opportunity to restore its own health, we saw immediate results in the reserve areas as saplings thrived free of livestock grazing. 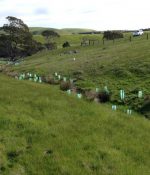 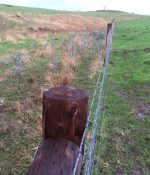 Although there are overarching actions we are taking, each of the different areas on the property need their own specific work to assist in revegetation. Fencing off a number of reserves, allowing no or minimal (crash) grazing, is giving natural regeneration the best possible chance. Maintaining a productive herd of cattle is an effective way to minimise weed infestations in the grazing paddocks, so long as the grazing is well managed. Rotating the cattle through a number of small ( 3 hectare) paddocks encourages them to eat whatever is in there (including their less preferred feed) to a low level before moving on to the next paddock.

While we are watching to see how areas responded to no grazing we focused on establishing the paddock trees. This will, over time, result in trees of various ages which will provide shade and protection for the herd as well an environment for local fauna. We have been pleased to see kangaroos already sitting in the shade of trees we planted 4-5 years ago.

We are members of Trees for Life, so have grown many of our paddock trees (primarily Southern Blue Gum (Eucalyptus leucoxylon) and Drooping Sheoak (Allocasuarina verticillata) from seed. Planting understorey species is not really possible in the grazing paddocks but this is a major strategy in the Reserves. We have also grown from seed, and planted several species endemic to the region, including Blackwood (Acacia melanoxylon), Golden Wattle (Acacia pycnantha), Kangaroo Thorn (Acacia paradoxa), Silky Tea Tree (Leptospermum lanigerum), Sticky Hop Bush (Dodonaea viscosa spatulata), River Bottle-brush (Callistemon sieberi) and many others. These plantings will help complement the remnant Silky Tea Tree and Australian Christmas Bush (Bursaria Spinosa). We are pleased to have had comments from people the Christmas bushes are the biggest and oldest they have seen. The Christmas Bush has its name due to over the Christmas period is when it is in flower with this mass of white all over. We are hoping that increasing the understorey plantings, particularly in the Anacotilla River Gorge will help protect the River Red Gums in the future from diebacks caused by infestations of lerp (psyllid insects) which sadly affected our trees and many others in the region in 2016 – 2017. 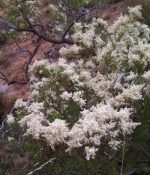 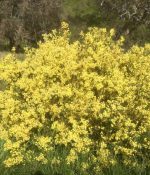 The ongoing work of re-establishing bush land has its rewards but also disappointments. One such disappointment, annoyance, infuriation… has been the recent increase in the feral deer that use the Anacotilla Gorge as a refuge. They can cover a large distance quickly with the steepness of the hills not impeding their movement. Five years ago we planted numerous blue gum seedlings in an area intended for future use as a wood-lot. Nearly every tree has been damaged. The severity and type of damage indicates feral deer rather than an over zealous kangaroo. In early July we saw a group of what appeared to be eight male deer, ranging from full grown with big sets of antlers down to the young. We were over 400m away but as soon as we moved, they knew we were there and watched us intently and finally bolting up the hill. The SA Government has brought in new requirements on the destroying of feral deer on farm land, and we are fortunate that our local NRM is running a feral deer control program which is taking a scientific and measured approach to reduce the number of deer in forests and farmland of the area. 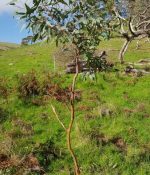 Fortunately the top branches were undamaged 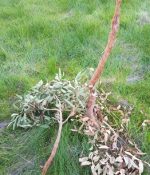 1.8m tree reduced to a stump 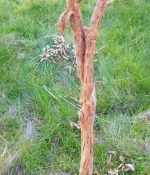 Cuts in bark and trunk 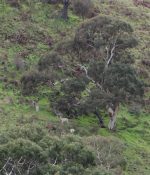 The Fleurieu is well known for the great examples of the magnificent Grass Tree (Xanthorrhoea semiplana), with some remnant examples reaching the proportions of a large tree. In South Australia, Xanthorrhoea is commonly known as yacca, also spelled yakka and yacka, suggested to be from the local Kaurna language. Through our readings we have found out that in the early days of settlement the grass tree was harvested for its gum (the resin-yielding species) resulting in large areas now void of the plant. It is understood Aboriginal people used the resin for spear-making and as an invaluable adhesive. Our property was one that was harvested severely with numerous plants visible in the neighbours on the other side of the fence but none in ours.  We were very pleased one day when investigating what we thought was a Briar Rose on the steep side of the gorge to discover it was the last remaining example of Yacca on our place.  We have tried planting some more plants next to it but with out success.  This will be one of our endeavours oveer the next years to get some plants to survive and keep the lone pioneer company.

Most species of Xanthorrhoea are extremely slow growing. Studies of some of the taller species found that trunk height increases at about 0.8cm to 6cm per year, but this varies with local environmental conditions. In any event, grass trees are often very long-lived; some are estimated to be 350 to 450 years old! This slow rate of growing means we wont see the results of new plantings over our life time but know that it will help for future generations. 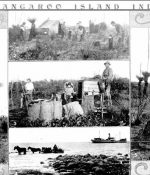 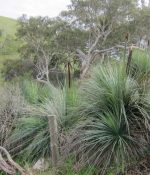 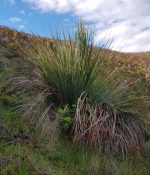 There are many other people in the Fleurieu Peninsula who are working toward improving their piece of land, trying various agricultural and re-vegetation techniques and ideas. Our neighbours Joel and Sophie are creating a great example of land regeneration and permaculture on their property, Yarnauwi and their website is inspirational and informative as a chronicle of their journey and providing many ideas, references, facts and figures. A visit to the website of Lot 50-Kanyanyapilla at McLaren Vale is also worthwhile to see great steps forward in ecological and cultural regeneration.